A Year Without George Morris: Day -1

It is an annual tradition at this time of year to curl up on the sofa and watch the George H. Morris Horsemastership Training Session.  This year I have to watch it without George.  It isn't even 2016 yet and I miss him already.  I will survive.  I will survive.  Will I survive?
Posted by HillbillyFarms at 9:05 AM No comments:

Area Horse Can't Help It If Everyone Who Rides Him Is Accident Prone
Posted by HillbillyFarms at 7:12 PM 1 comment:

Email ThisBlogThis!Share to TwitterShare to FacebookShare to Pinterest
Labels: THWWD

No No Stirrups November A Success For Local Rider

Local rider Lauren Montgomery has declared No No Stirrups November a success.  Montgomery managed to go the entire month without once riding without stirrups.  To accomplish this feat, Montgomery had to pull from a long list of excuses, including:

Montgomery now has her sights set on January, where she hopes to set a new personal record for breaking her New Year's resolutions.
Posted by HillbillyFarms at 6:41 PM No comments:

Email ThisBlogThis!Share to TwitterShare to FacebookShare to Pinterest
Labels: No Stirrups November

Get a jump on your Black Friday shopping!  Hillbilly Press has announced a Black Friday Sale** starting Monday, November 23rd.  During this time the only book in the Hillbilly Press catalog, The Big George Morris Clinic, will be on sale for the low, low price of $0.99 (regular retail price is $0.99, a savings of 0.0%!).  Don't miss out on this great deal!  Buy now before it's too late!! 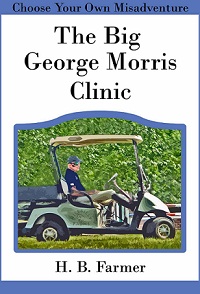 This choose your own misadventure book presents you with the once in a lifetime opportunity to attend a clinic with the infamous George Morris. "The Big George Morris Clinic" is a chance to learn from the best and experience what it feels like to get yelled at by a legend. What will happen when George Morris comes to town? YOU decide!

**Usual restrictions and exclusions apply.
Posted by HillbillyFarms at 8:32 PM No comments:

Upon hearing the news that George Morris would not be teaching clinics in 2016, area rider Claire Lucas became concerned that she might be to blame.  "I took a clinic from George Morris a few weeks ago and I thought it went pretty well.  Then when I heard this news I started to worry.  I mean, I know I am not the greatest rider and I fell off twice, but could I be bad enough to make George Morris quit?"

Lucas also expressed concern that her horse, Cahoots, might have contributed to Morris's sabbatical.  Reflecting on her horse's contributions to her two falls, she asked, "Do you think Cahoots could have pushed George over the edge?"

Morris could not be reached for comment.
Posted by HillbillyFarms at 7:49 PM No comments:

Your horse just checked his schedule and, yes, he does have all day to play this game.

Your horse just checked his schedule and, yes, he does have all day to play this game.
Posted by HillbillyFarms at 7:57 PM No comments:

"In the spring a young horse's thoughts turn to whatever that is lurking in the bushes over there."
Posted by HillbillyFarms at 6:48 PM No comments: